VANCOUVER, Jan. 25, 2018 - Kincora Copper Ltd. (the "Company", "Kincora") (TSXV:KCC) is pleased to announce the findings of the Mining Associates Limited ("Mining Associates") review of its wholly owned Bronze Fox copper-gold porphyry project in the Southern Gobi, Mongolia (scope of the review and background on the Bronze Fox project provided in the November 21st, 2017 press release).

The Mining Associates review has provided an independent block model supporting a large-scale copper-gold porphyry exploration target. The system is bisected by a key regional fault at the West Kasulu prospect that lies within the western central portion of the Bronze Fox Intrusive Complex ("BFIC"), which has important implications to exploration going forward as the most prospective zones of the porphyry system have had limited previous exploration and drilling (Figures 3 & 4).

Sam Spring, President & CEO, commented: "The review has assisted to quantify Kincora's large tonnage system at Bronze Fox, which has surprised on the upside to expectations, providing parameters for future exploration and steps required for a potential NI 43-101 defined resource. Two zones have been identified within West Kasulu, bisected by a regional fault, with particular encouragement provided by the most prospective parts of the porphyry system having effectively been sterilized to Kincora due to access, which is now resolved. Previous drilling by Kincora into this now better understood western zone is limited to only 4 holes for 2,170 metres during 2012, with 3 of those holes providing higher grade intersections, including F62 which returned 37 metres at 1.01% CuEq within a broader intersection2.

New drill targets have been recommended and further analysis is ongoing to support potential additional targets. Kincora's next technical workshop is scheduled for next week and will look to determine the next steps at Bronze Fox as well as advance the rest of the Company's projects located within its dominant position in the Southern Gobi Devonian copper belt."

With access to the whole Bronze Fox project restored and the recent improvement in the copper price, Mining Associates considers scope for Kincora to follow a similar strategy to that being pursued by Xanadu Mines at its advanced Kharmagtai porphyry project, where Mining Associates previously provided a similar exploration target and review. 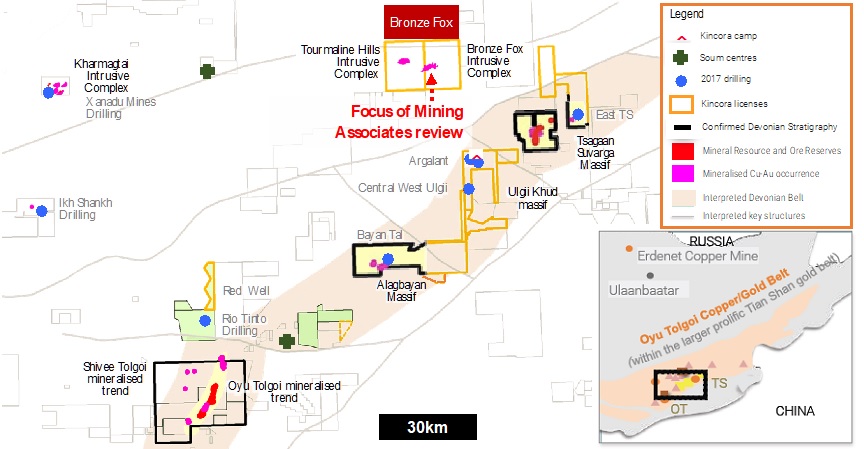 Background
The Bronze Fox project has an extensive mineralized footprint of over 40km2 within the Bronze Fox Intrusive Complex ("BFIC") and also covering 15km2 at the neighbouring Tourmaline Hills Intrusive Complex ("THIC"). These were supported by only two unencumbered drilling exploration field seasons (one by Ivanhoe Mines and one by Kincora) within the two-license portfolio that hosts the full BFIC.

The BFIC includes a western central portion where 76 holes were drilled for 24,139 metres across a 1.4 km by 2.4 km zone at a prospect named by Kincora as West Kasulu (known as "Bronze Fox" by Ivanhoe Mines, who undertook drilling in 2006) – refer Figure 3. Within this zone broad low grade copper-gold mineralization commonly with localized higher grades was encountered along a 1.3 km strike length. Mineralisation extends from surface to a maximum vertical depth of 1,280 m (hole F62, drilled by Kincora in 2012), with two apparent zones intersected by a central NNE regional fault (the "Tov" fault) with potentially higher grade mineralisation hosted in a younger monzonite located to the NW (28 holes for 6,012 m, including only 4 holes for 2,170 metres drilled during 2012 by Kincora) and a better defined bulk lower grade system to the SE within a granodiorite with apparent NW-SE trending cross faulting (53 holes for 18,841 m) – refer to Figures 4 and 5.

Figure 3: Mineralisation at the central western portion of the BFIC extends across the license boundary at the West Kasulu prospect with exploration previously impacted by access 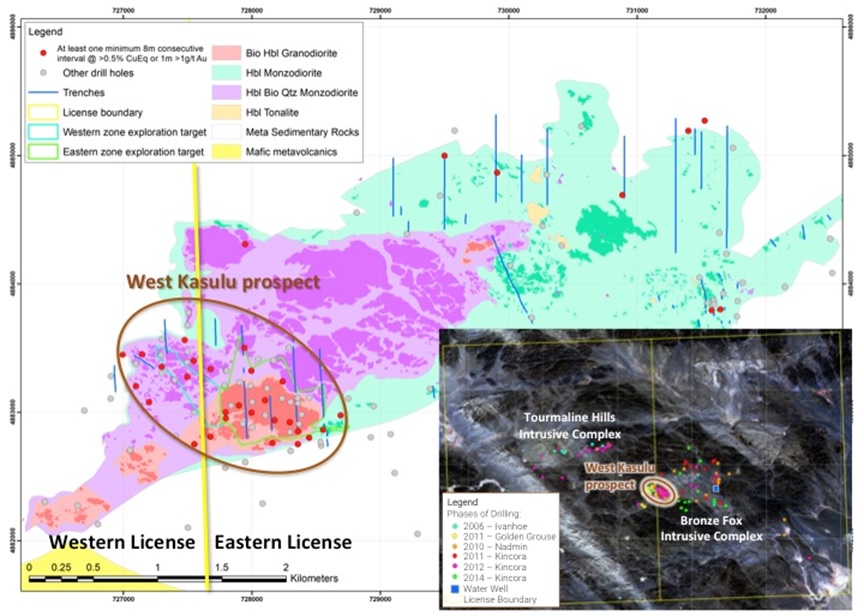 Despite more encouraging grades (with Mo zonation) in holes F57, F85 and F62 (the latter including 37 meters at over 1% copper equivalent2), indicating a more potentially favourable preservation level in the porphyry setting, the NW monzonite zone has had limited exploration, with 4 holes for 2,170 metres by Kincora in 2012 and 24 holes for 3,841 metres by previous tenement holders.

Kincora consolidated the ownership of the West Kasulu prospect in early 2012 and completed only one field season of exploration before being impacted by the 106-license dispute (where the western license was revoked – see license boundary in Figures 3 & 4) and depressed copper prices, and then completing the IBEX transaction. The Mining Associates review has provided improved geological interpretation of the West Kasulu prospect with recommendations for follow up exploration including proposed drilling targets.

Figure 4: Encouragement is provided by the most prospective parts of the interpreted porphyry system having limited historical exploration and drilling 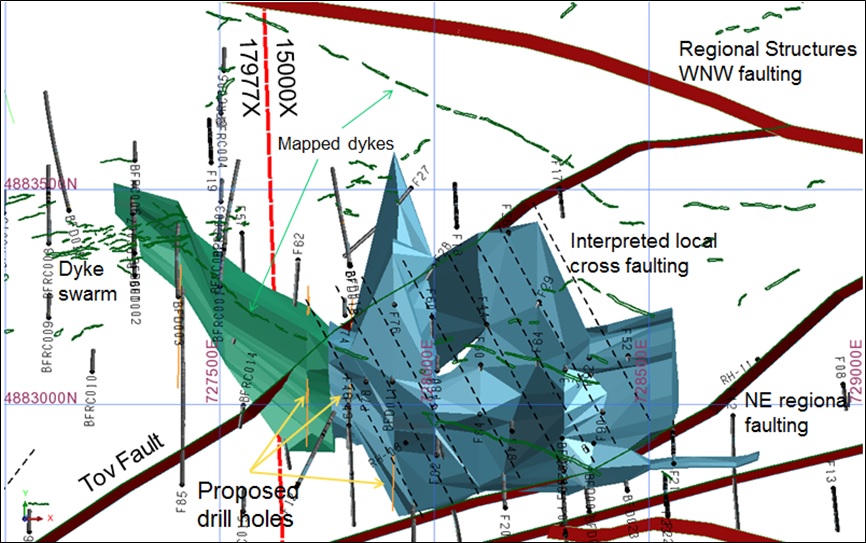 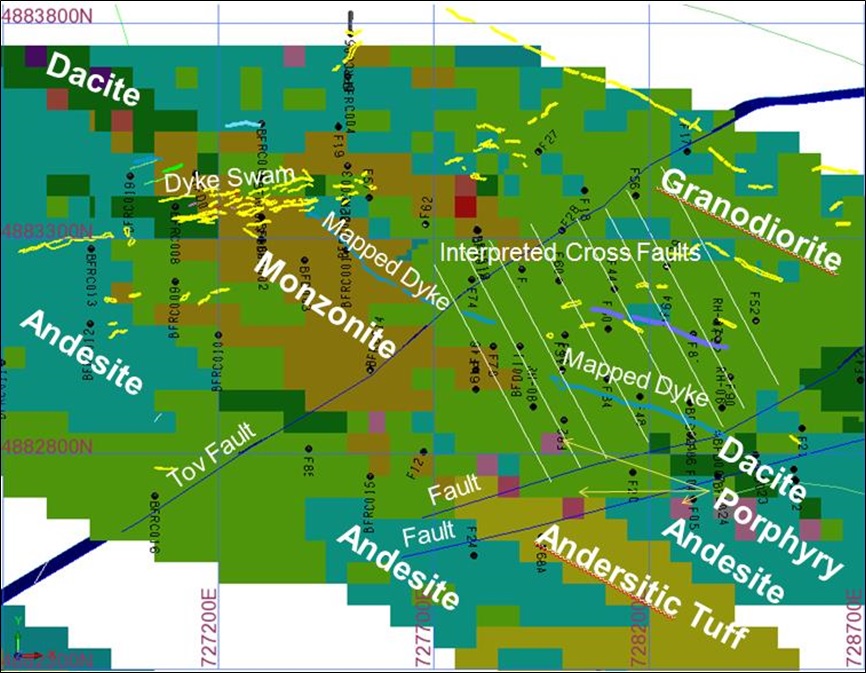 The exploration target is supported by a 3D block model generated by nearest neighbour and ordinary kriging methods supporting a tonnage exploration target range of 416 Mt to 428 Mt, grading 0.26% to 0.30% copper for up to 2,437Mlb of copper and 0.84Moz gold1 (Figure 1).  This estimate of the mineralized system is conceptual in nature and shows the potential tonnage and grade, but currently with insufficient exploration to define a mineral resource, noting modest drilling relative to the more advanced copper porphyry exploration and development projects in Mongolia (refer Figures 6 & 7).  It is uncertain if further exploration will result in the target being delineated as a mineral resource. 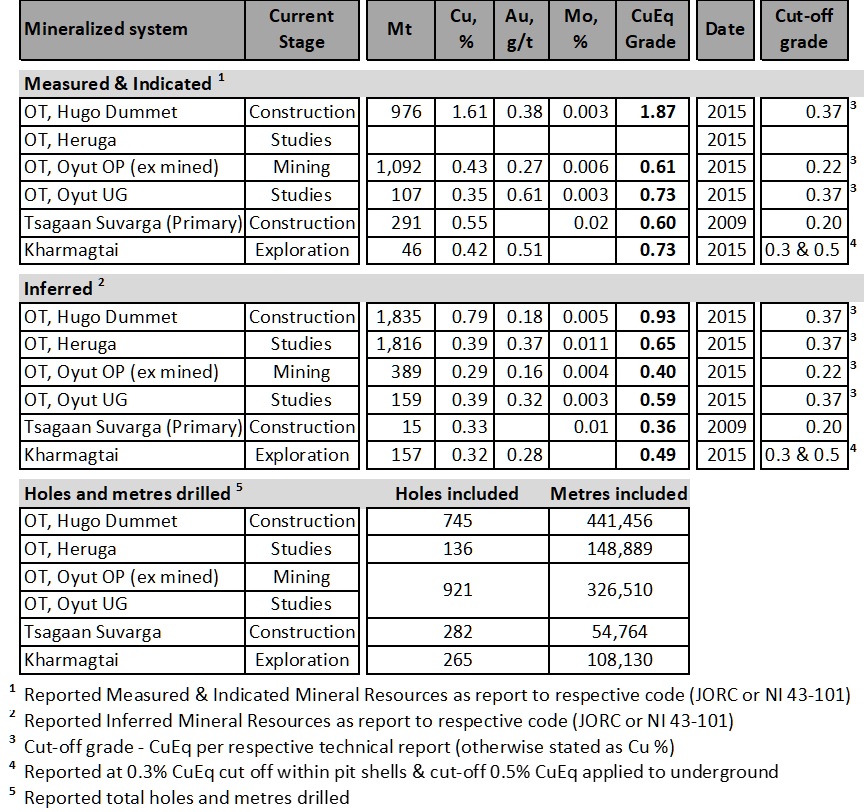 Figure 7: Overview of the carboniferous Cu-Au exploration projects in the Southern Gobi 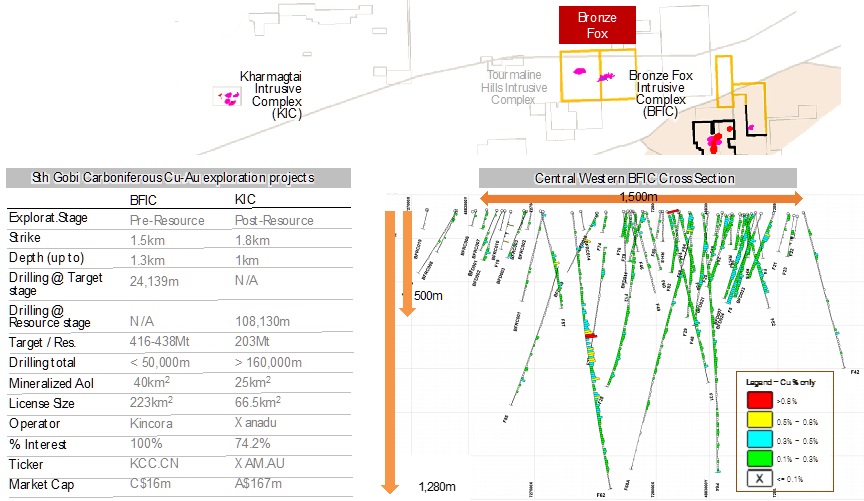 The potential quantity and grade is conceptual in nature, and based on nearest neighbour and ordinary krige estimates within an interpreted 0.2% Cu grade shell based on 81 drill holes spaced approximately 200 x 200 m within the West Kasulu prospect within the western central portion of the Bronze Fox Intrusive Complex. The drill spacing is too broad to define grade continuity, but does illustrate geological continuity. No assumptions regarding eventual economic extraction have been applied. The potential quantity and grade is conceptual in nature, there has been insufficient exploration to define a mineral resource and it is uncertain if further exploration will result in the target being delineated as a mineral resource.

F62 – 37m grading 0.83% copper and 0.14g/t gold (1.01% CuEq) from 573m, within 391m @ 0.50% CuEq (0.41% copper and 0.08g/t gold) and 794m at 0.40% CuEq. The Copper Equivalent (CuEq) calculation represents an estimate for the total value for each metal, multiplied by the conversion factor, summed and expressed in equivalent copper percentage based on spot prices (Cu $3.11/lb, Au $1279/oz and Mo $7.1/lb). Grades have not been adjusted for metallurgical or refining recoveries and the copper equivalent grades are of an exploration nature only and intended for summarizing grade. The copper equivalent calculation is intended as an indicative value only.